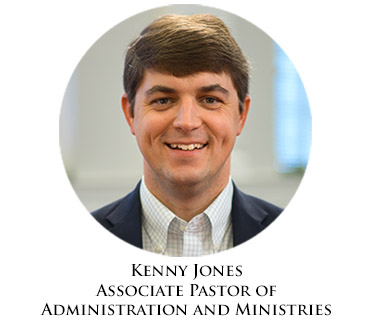 Kenny Jones became the Associate Pastor of Administration and Ministries in March of 2020. As Associate Pastor, Kenny is responsible for overseeing all operations, providing direction for Capital’s ministries, and leading the staff team.

Kenny completed his undergraduate work at Campbell University, with a BBA in Trust and Wealth Management. Kenny then completed a Master of Divinity from Southeastern Baptist Theological Seminary. After graduating from Southeastern, he worked in Southeastern’s development office and later with First Citizens Bank in the Institutional Trust division. Kenny is currently pursuing his Doctor of Ministry at The Master's Seminary.

Kenny has a passion to equip every Christian to effectively use their spiritual gifts for the edification of the whole church and ultimately for the glory of God. He also enjoys laboring in the ‘verse-by-verse’ teaching of the Bible so that God’s Word builds-up the body. Finally, Kenny also desires to steward with excellence the resources God has given Capital Community Church.

Kenny has been married to Kathryn since 2011, and they have three daughers.