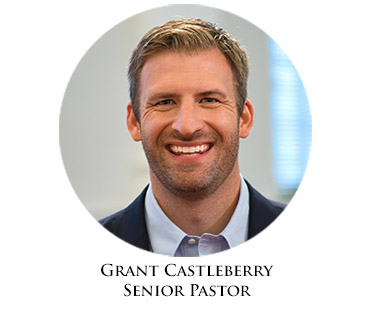 Grant Castleberry became the senior pastor of Capital Community Church in August of 2019. As senior pastor of Capital, Grant is responsible for preaching the Word of God, shepherding, caring for, discipling, and equipping the saints for the work of ministry, and working with the elders to cast the overall vision for Capital. Grant completed his undergraduate work at Texas A&M University, while also serving in the student body elected positions of junior yell leader and then head yell leader his senior year. He holds a Master of Divinity (MDiv) degree and a Master of Theology (ThM) degree in Historical Theology from The Southern Baptist Theological Seminary in Louisville, KY. Grant is pursuing a Phd through Union school of Theology in Wales, writing on Dr. D. Martyn Lloyd-Jones

Grant was commissioned as an officer in the United States Marine Corps upon graduation from Texas A&M in 2007. He served primarily overseas as an air traffic control officer and then as a series commander at Parris Island, South Carolina, where he was promoted to the rank of captain. Upon finishing active duty service, Grant entered full-time gospel ministry serving in churches in South Carolina, Kentucky, and Texas as well as the executive director for the Council on Biblical Manhood and Womanhood.

The emphasis of Grant’s preaching ministry is on the Christ-centered, verse-by-verse, and sequential exposition of the Bible, experientially applying the Word of God to the Christian life. Grant is also passionate about evangelizing the lost and discipling believers so that they reach maturity in Christ. Grant writes periodically for Tabletalk Magazine and Reformanda Ministries.

Grant has been married to his wife, GraceAnna, since 2009, and they have four children.